This a shortened version of Julie's explanation of leprechaun magic.
Julie's imagination is immense and she has absolute belief in everything fantasy. Scott and I are positive we won't have to answer any questions about Santa Claus for another five years. She just believes unconditionally.

She has always been that way- completely fascinated by worlds that are unreal to most of the rest of us. One of her preschool teachers once told us, "Julie has her head with the fairies."
Even this year in first grade, Julie often zones out during class, and we think she's just caught up in her imaginary worlds.

I will take the blame for some of this obsession with fantasy. Since she was a toddler, there have been imaginary beings visiting Julie. From our Christmas Angel who bestows small gifts for 12 nights leading up to Christmas and our Elf on the Shelf to our little leprechaun who visits us a week or so before St. Patrick's Day, trashing the house and leaving small treats---our family has its fair share of mystical beings.

Julie's latest obsession is the tooth fairy. Since the tooth fairy left her a special tooth box this week, Julie has become completely enamored with her.

Last night she left this note for the Tooth Fairy written on little pink paper with bright pink pen:

Dear Tooth Fairy,
Thank you so much for everything. I think you are fantastic. I believe in you so much!
Love, Julie
Age 7 :)


I wish I could just bottle up her innocence or freeze her in time. 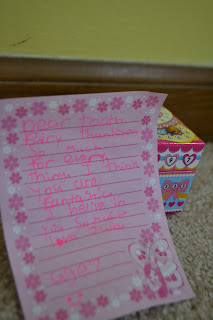 Posted by Kristy MacKaben at 1:00 PM