When I went away to college, I barely left home.
It was a 45 minute drive from Baltimore to University of Delaware and that seemed safe.
Far enough away where mom and dad wouldn't just drop by unannounced, yet close enough that I could drive home late on a Thursday night, crying all the way, because I was upset that I hated student teaching.

After college, my friends all moved into trendy apartments in Manhattan or downtown Baltimore or Philly. Places that were fun and made them feel all grown up.
Where did I move after college?
You guessed it.
Back to 26 Bantry Court.
Slept in my girlhood bed with pink sheets, and ate dinner every night with my parents. It was comfortable and I was saving money.

Two years later I moved out. Because I got married. We lived in a little townhouse not unlike the one I grew up in, and we were 15 minutes away from my parents. I thought we'd never leave.

Except we did. Two years later we moved to Altoona, Pennsylvania--three hours from  Baltimore. Oddly enough, my parents quickly followed and moved to Cumberland, Maryland--about an hour from Altoona.

They were there for all the holidays, birthdays, special events, and just because. We saw them probably every other weekend.

I always knew we wouldn't be in Altoona forever, but I never dreamed we would live this far away from family.
598 miles to be exact. That's a 10 hour drive.

The seven months in Chicago have been amazing--kind of like a vacation. We love our new home and neighborhood. There's so much to see and do. And, we've had visitors literally every month.

My parents just left yesterday after visiting for 2 1/2 weeks. It was great to have them here for so long and the kids just love spending time with them.

When they left yesterday, I realized we won't see them until July. That's three months away! That's the longest I've ever been away from them in my life. I know it's something I have to get used to, and that's just life now. But, it's so hard to think about the lapse between seeing them.

Julie was so upset yesterday when she headed off for school. It broke her heart knowing that Meme and Papa would be gone when she got home. "Why do they have to leave? Why can't they just live here?"

I can't help but feel the same. 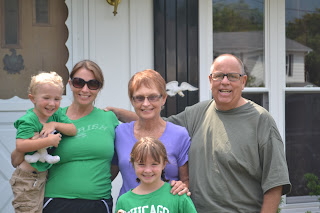 Posted by Kristy MacKaben at 4:17 AM