I clearly remember my first grade teacher.
Her pointy nose and pixie cut. Thin frame and stylish clothes. She went by "Ms." instead of "Mrs." or "Miss" so we never knew whether she was married.
She was not one of the good ones.
I was painfully shy in first grade...so shy that I never raised my hand. Ever.
It was hard for me to even speak when called on.
So, "Ms." assumed I had something wrong with me...a learning disability of some sort.
Of course that put my parents, both educators, up in arms.
Because of this assumption I was placed in a low performing second grade class. (Back when they placed by ability.) This meant my teacher was Mrs. Anthony--the best teacher imaginable. She made me feel like the most special kid in the school, though I'm sure she did the same for everyone else in the class. By the middle of second grade, this complete introvert was happily performing plays based on books in front of the classroom. One particular performance I played the part of "Mama Bear" and I went out on a limb and pecked "Papa Bear" on the cheek. (He was played by Mark, my second grade crush.)
Mrs. Anthony knew each student performed at different levels and quickly moved three of us to an elevated reading program and placed us in a pull-out gifted and talented program taught by a different teacher once a week. She taught to each student's level and pushed us to our abilities, without us even knowing. She believed in us.
She was simply one of the best.
That's what I want for my kids--teachers who bring out their best.

We weren't sure how this year would go for Julie. We moved 600 miles away two weeks before school started. No time to meet the neighborhood kids or become familiar with the area.
The day before school started, Julie was a wreck. She was nervous and sad and certain she wouldn't make friends and her teacher would be mean.
Then a phone call came the night before the first day of school.
It was her first grade teacher Mrs. Johnson calling to talk to Julie.
That really stuck with me. A teacher that would take the time to call every student the day before school has to be something special.
Mrs. Johnson is Julie's "Mrs. Anthony."
She notices the students' strengths and weaknesses, and motivates them to improve. When they do succeed, she's their ultimate cheerleader. Julie's printing at the beginning of the year was ineligible, to put it nicely. By the middle of the year it was so neat it "resembled a computer font," to use Mrs. Johnson's words. Then, there's the case of Julie's disorganization. Julie's desk is a mess and she regularly forgets things. One day Julie was supposed to bring something home to me which never made it home. I assumed Julie had lost it on the commute. Mrs. Johnson quickly admitted it was her mistake because she forgot to hand it to Julie. She felt so bad about it the next day, that she sent Julie home with a little penguin puppet because penguins are her favorite animal.
Little touches like these really make a kid feel special.
Mrs. Johnson is simply one of the best. 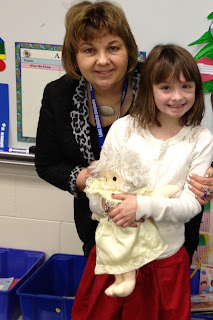 Posted by Kristy MacKaben at 4:32 AM