Hostess with the Mostess

Since we moved to Chicago last August, we have hosted visitors every month. I don't think people really love us as much as they are infatuated with the Windy City.

Though family members were the most frequent visitors, hosting friends was definitely the most stressful. There's just a little bit more that goes into hosting friends. Not only do we have to feed them and make them feel at home, but we want them to have an awesome time in our new city. Essentially, we are tour guides---something that doesn't come naturally to Scott and me. Organizing and planning aren't innate capabilities. We kind of just always expect things to fall into place without much forethought on our part.

Our first attempt at hosting friends in Chicago was a miserable failure.
It was in October--two months after we moved, when our very good friends Heather and Grant decided to visit from Maryland. I'm not sure what else could have gone wrong.

We didn't know the city at all, so we spent most of Saturday bumbling around aimlessly downtown. Dinner at Giordano's lasted over two hours, with two hungry and tired kids whining for food and bed. Our toilet started leaking on Sunday and the guys spent all day carrying buckets of dirty water outside until a plumber arrived. Traffic was horrific on Sunday evening and the two almost missed their flight home from Midway. After they left, we just felt awful, and were determined to do better next time.

We have learned a lot since that first attempt at hospitality. Above all else: plan! When you have visitors in town, you can never over-plan.

My tour guiding abilities were at a peak this weekend when my college friends Kelly and Beth were visiting. We spent two full days in the city and I was able to show them Navy Pier, Lincoln Park and everything along the Magnificent Mile. We took a boat tour of the city, ate at a couple amazing restaurants and guzzled drinks at the Wit's rooftop bar.

The trip was a success! 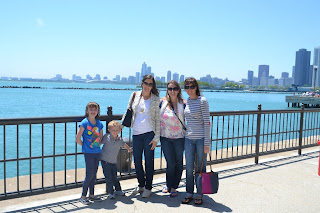 Posted by Kristy MacKaben at 8:25 PM