How about them apples?

It all started with the coloring contest.
On the first day of Johnny's preschool, there was a coloring contest. Three kids were awarded ribbons for the their coloring prowess. The rest of the papers were tacked neatly on the wall outside of the classroom for all the parents to see. Smiley face stickers or "Way to Go" stamps joyfully adorned each paper.
Except one.
Belonging to my Johnny.
"Done with Teacher's Help" was written in red ink across the top of the paper.
I glanced at the paper in disbelief, but not too long, so the other nosey parents wouldn't think it belonged to my son. All I could think was "Seriously? You're going to call out my son on the first day for not coloring a picture of a school bus absolutely perfectly?"

This time it was a drawing of a pencil.
First place. Second place. Third place. Stickers. Stamps. Smiley faces.

And, "Done with Teacher's Help" inscribed boldly on top of one paper.
Johnny's.
Once again neatly tacked outside the classroom for all the parents to notice as they waited for their perfect little artists to exit the classroom.

As I steamed a bit, I half wondered whether I was being irrational. Was I the only mom who thought it a bit ridiculous for 4 year olds to participate in coloring contests the first and second days of preschool? And, also display the results for everyone to see? Do we really want our kids being in competition this early in the school year or really in their school careers? Can't we all just work together? More importantly, did I really care whether Johnny was an expert colorer or drawer or whatever-er at 4 years old? Did it really matter whether he colored perfectly in the lines or batted his eyelashes and asked the teacher for help? Did he really need his mistakes circled where he had colored outside the lines with little red "Oops! :)" written next to the mistakes?

Plus, I felt bad for the kid. Later that day Johnny got all pouty and proclaimed that  he was an "awful color person" because he "wost the contest."

So, we worked on coloring all weekend. And drawing. He got little prizes for working really hard and coloring in the lines.

That next Monday he won first place. He drew an apple and it was darn good. 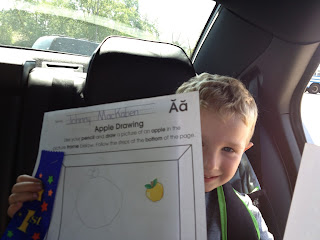 Posted by Kristy MacKaben at 8:23 PM