I've always loved Halloween. There's just something about wearing a costume---any costume you want, that's free-ing. I think my best costume as a kid was a refrigerator full of food. So random, but I think I won a costume contest that year.

Before kids, Scott and I always went all out for Halloween. One year we were smurfs. Then we were Hungry Hungry hippos. Another year he was the Pillsbury Dough Boy and I was Miss Piggy. We didn't match but it was still fun.

Dressing up kids on Halloween is awesome....until they start picking out their own costumes. That takes the creative fun out of it for parents, doesn't it? Obviously kidding...but sometimes I just want to rewind to the days when they were babies and I could dress them up as Kermit the Frog and they would have no clue.

I have learned to deal with their choices and try to jazz up the creativity. This year Julie wanted to be Dorothy, which was a totally cute choice. Johnny couldn't make up his mind. He wanted to be a tree. Then a flower. Then a black pumpkin. So, I suggested a lion to go with the whole Wizard of Oz theme. "Yeah. That's good," he said.

Of course we had to get our puppy Chico in on the fun. Julie wanted him to be Toto, but that's just kind of boring and predictable. So, he was the Tin Man. Hilarious. And, I can't go a Halloween without dressing up, so I was the Wicked Witch of the West. Scott wasn't a fan of dressing up as a scarecrow, so he was out this year.

Next year we have a great idea---let's just hope the kids agree! 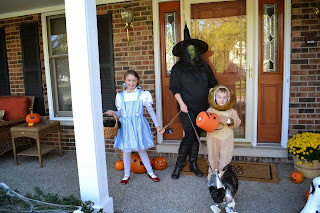 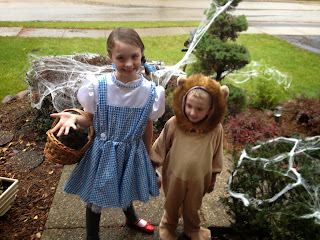 Posted by Kristy MacKaben at 5:29 AM