My daughter is 10.
In my mind, she's the little girl who writes stories about imaginary creatures, and plays for hours on end with Beanie-boos and Barbies. She believes in Santa, the Easter Bunny, the Elf on the Shelf, the Tooth Fairy and mischievous leprechauns.

She wants nothing to do with boys and makeup or fashion. She doesn't understand puberty and wouldn't mind taking a bath with her 6 year old brother while they play super heroes--even though we long ago ended this ritual.

She's innocent and sweet and naive and clueless, or so I thought.

Then, I found this. 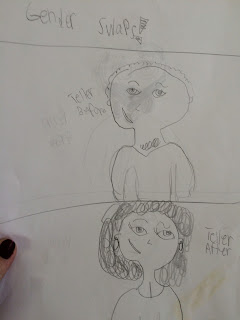 I wasn't snooping. I swear. I just happened to be cleaning up her desk. She had been home sick the day before and there were tissues and cough drop wrappers everywhere. But, then I found this---an entire artist's pad full of before and after drawings of people who had apparently undergone a sex change or "gender swap." There's Belle and Elsa becoming boys and Penn and Teller becoming women. There's Aladdin and Prince Charming and Cinderella and Snow White. All undergoing gender transformations.

What the heck?? Seriously, what the heck is going on? What does this mean?

I wracked my brain trying to think when she would have even heard the term. Had she been watching the news about Caitlyn Jenner? Or was it something she found on her own?

Then I freaked about what she might have googled or found on YouTube. Both kids are allowed an hour on Saturday and an hour on Sunday of iPad/laptop time. During the week, they only use technology for school work. So, it's not like they have been spending countless hours online.

But, apparently that was enough. Along with the Barbie videos she watches on YouTube, Julie found some "shows" about Disney characters and gender swaps. Basically, there were cartoon renderings of how different characters would look if they were the opposite sex.

So, not as awful as I thought, but still a little bit more information than I was willing to cover with a 10-year-old. Of course I know our kids can't stay sheltered forever, and I know that this is the real world. There are all different types of people, and of course I want our kids to know that and be respectful and tolerant and kind. I get all that and we aren't raising our kids to hate or judge.

But, some topics are just too hard to explain, and I'm not ready. I'm just not. Somehow 10 years crept up on us, and we have an obviously curious little girl who knows more about the world than we realized.

From this little revelation, two things have occurred: No more YouTube. (That's just asking for trouble.) And, Scott and I are determined to be more inquisitive and tuned in to the kids, and not just assume that everything is right and innocent in their little worlds. I recently read a blog by a mom who said just because children are quiet doesn't mean they aren't feeling or thinking certain things.

I think that's what I've learned from this. While our kids may be so innocent in so many ways, there are so many things they are learning and feeling and experiencing every day. All we, as parents can do is be loving and open and listen. Just listen.

Posted by Kristy MacKaben at 12:06 PM