A sad, but necessary Goodbye 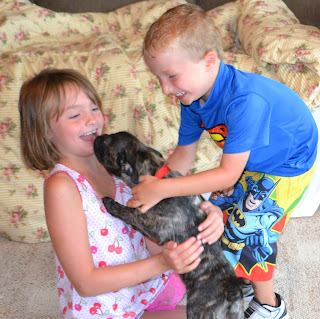 This was two years ago---the day we brought home Chico--our lovable little pug mix. It took quite a bit of convincing for me to agree to becoming a dog owner. I didn't grow up with dogs, so I didn't know if I was up to the task of taking care of and training a puppy. But, knowing how much the kids wanted a dog, and seeing them interact with their Aunt Kelly's dogs, I thought a puppy would be a great addition to our family.

And he was. He was lovable, snuggly and playful. Chico tolerated the kids' antics much more than other dogs would have. He didn't  seem to mind the noise and the wrestling and the hugging and smooshing. Julie and Johnny seemed to have poor Chico in a constant snuggle or stranglehold. They just couldn't get enough of him.
And of course he taught them responsibility. Johnny filled  his bowls every day with food and water, and Julie walked him whenever he rang his little potty bell.

While there was so much good about having our little friend, he became more than we could handle. After moving to Georgia and having our third baby Josie, Chico seemed restless. We aren't sure whether it was the stress of moving and having a baby in the house, or whether we weren't giving him the attention he needed because of the baby. But, he began constantly running away. Every day. Sometimes a couple times a day. Not only would he run away, but he wouldn't return and he wouldn't come when we called. Instead of running up to us, he darted away as soon as he spotted us.

So, we'd spend hours looking for him. It was exhausting and frustrating and upsetting for the kids. The day we knew he couldn't be ours anymore was a day I'll always remember.
I was upstairs feeding Josie. Johnny ran up the stairs, breathless. "Mommy. Chico ran away and Julie went to look for him."

This wasn't alarming at first, but when I went outside, I didn't see Chico or Julie. I spent the next 20 minutes canvassing the neighborhood with Josie and Johnny trying to find Julie. At this point, I was cursing the darn dog and I really didn't care if I ever saw him again. I just wanted to find my daughter. To say I was panicked, was an understatement.

Finally, she showed up without the dog, and told us she had followed Chico into the woods near our house where there is a creek, a steep drop and all kinds of critters, including snakes.

We eventually did find Chico after searching for another hour, but I knew that he couldn't live with us anymore. Scott and I decided that we would either give him back to Kelly or find someone local to take him. At this point it was too dangerous for the kids and the dog to keep him.
The very next day, Chico ran away again. This time no one chased him. We knew he wouldn't come to us. It was a terrible feeling, but we had given up on him.

Later that day, a man called and said he found him on the road, and saw him almost get hit twice by cars. He and his wife lived right across the street from our neighborhood. Two months prior, their 14-year-old dog had died and they had been wanting a dog. They said they fell in love with Chico and that if we ever had thoughts of giving him up, they would love to have him.

This felt right...like it was meant to be.

While was heartbreaking, especially for the kids, to give up our dog, we knew this wasn't the right fit for Chico. I really think a dog must run away for a reason. Maybe he wasn't happy or he was restless or he just needed room to roam. Regardless, giving him away to the couple across the street with the huge fenced back yard made sense to us. Now we visit Chico every once and a while and we keep in touch with his new owners, who have fallen in love with the silly pup. They put him in a little training school and walk him on the trails twice a day. He's allowed free run of the backyard and he snuggles between them in bed.

We failed as dog owners, but at least our dog's in the right place.
Posted by Kristy MacKaben at 9:44 AM