I swear I won't become one of those moms from "Toddlers and Tiaras," but I am a tad obsessed with sharing pictures of baby Josie. I'm sure it's because she's our last baby and she's just so darn smiley and cute that I can't resist.

I constantly take pictures of her and sometimes enter her in little contests--Baby Gap, Gerber, Parenting....  She even  made the top 50 for Atlanta Parent Magazine's cover contest. Of course Scott and I thought she should have won the whole thing, but that's just us!

Most recently I sent her photo to a local baby talent scout. A neighbor, who did the same for her kids, suggested I do it. So, Josie's first modeling session for a toy company was last week, and it was so much fun. She giggled and smiled and played with the toys. I have no idea whether her photos will make the cut for the toy packaging, but I absolutely loved all the behind-the-scenes stuff. And Josie didn't complain a bit. It was like a little playdate for her because there were three other babies at the shoot.

I know it's a tad silly and a bit vain, but for now it's fun, and we get paid! Here's Josie on the set with the director. This might be our one and only photo shoot, but it was a fun experience, and a great addition to the baby book (which I haven't made  much progress on, but that's for another blog). 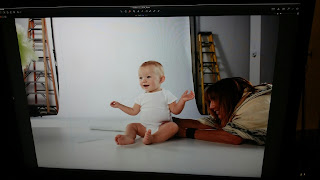 Posted by Kristy MacKaben at 7:31 AM