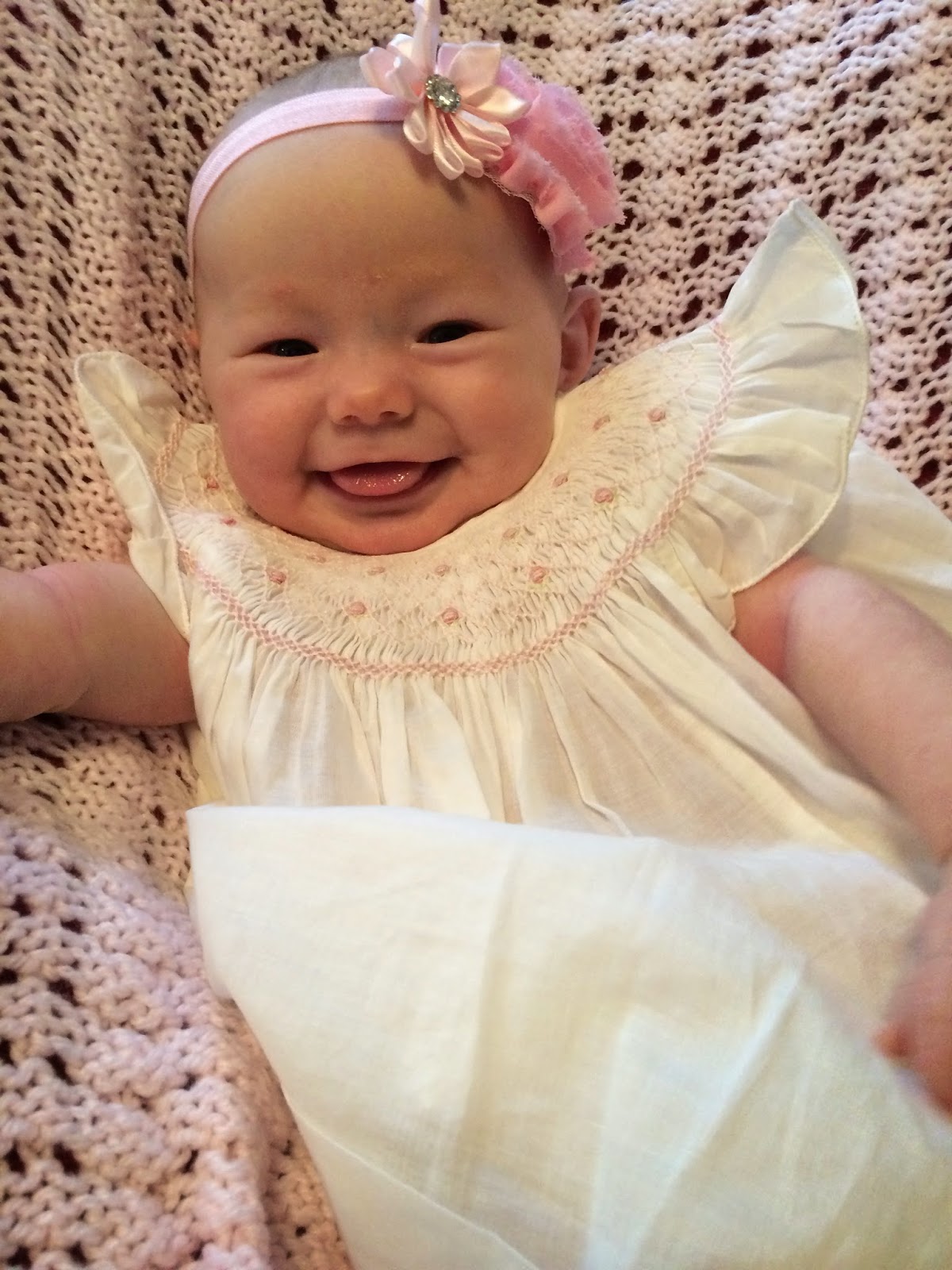 This sweet little girl just turned 3 months. She's smiling and rolling over (belly to back) and sucking on her hands and (sort of) interacts with all of us. But, the biggest milestone this month is a Mommy milestone.

I officially breastfed her longer than Julie. Three months might not sound like a long time, but for me it's a big accomplishment. Breastfeeding just doesn't come easily to me. I am just not that great at it. With Julie I stopped right around 10 weeks. I had to go back to work, and I had been supplementing with formula anyway since she always seemed hungry. I just felt like I was forever feeding her and that I wasn't making enough milk. She was my first and I felt terrible that I had to stop, but I did.

With Johnny I was determined to do better. I read books, asked for help from the lactation consultants, and all seemed OK. But he was losing weight. The pediatrician told me to start giving formula. (Pumping  for 30 minutes literally netted me an ounce or two at best.) Once he started drinking from the bottle, he wanted nothing to do with my poor performing breasts. (Scott once joked that my big boobs are just for show. haha.) I kept trying with Johnny because I was so determined to continue, but he drank less and less breast milk and more and more formula. A little before 6 months, he was completely done.

I felt like a failure and I had no idea what I did wrong. It doesn't help that there's so much pressure to breastfeed and as a mom, you feel awful if it doesn't work out. And there's just not that much help---at least not in the little Pennsylvania town where I was living at the time.

Before Josie was born, I decided I was going to try  my best, but I would also give myself a break if it didn't go as planned. When Josie was in the NICU I was almost certain breastfeeding wasn't in our future. I wasn't allowed to see and hold her until 12 hours after she was born. Those are the most critical hours when moms are supposed to bond with their babies and naturally feed them. She and I didn't get that. For the first three days of her life she was fed through a feeding tube. I wasn't even allowed to feed her at all--breast or bottle. On the fourth day they let her drink a bottle of formula. I had not yet pumped enough to make a full bottle. (Once I pumped enough, they began using breast milk.) I was certain that fate had been determined and we would have to start stocking up on formula.

But I met with the most amazing lactation consultant. Once the NICU nurses finally let me try to breastfeed Josie, the lactation consultant stayed with me and tried to help. The first attempt was kind of a bust. Josie latched on for a second, but wouldn't wake up at all no matter how hard we tried. And she was so fragile that I didn't want to upset her. The next time we met was a little better. The consultant encouraged me and talked sweetly to Josie as she pet her head. She positioned her just right and gave me some tips I had never thought about. We met again right before Josie was discharged and it went pretty well---though I was still nervous. (The doctors also wanted Josie to drink three to four bottles a day  for two weeks to make sure she was gaining weight. I admit that I didn't completely follow this advice.)

While we've had some difficult moments and times I almost just wanted to give up---we made it three months. In the grand timeline of life, it's just a speck. But, it's a huge milestone for us. While I once dubbed myself "the world's worst breastfeeder," I feel like I want to help other moms know that they can do it too if they want. And, also, that if it doesn't work out, it's OK. We all love our babies and try to do the best we can.

Posted by Kristy MacKaben at 11:30 AM