The pumpkin patch.
It's pretty much an obligatory part of Fall.
Considering I'm a sucker for all things festive, I'm all about visiting a pumpkin patch or two or three before Halloween. Chicagoland has plenty of great pumpkin patches.

When my parents were visiting a few weeks ago, we tried out Didier Farms in Lincolnshire. It's a bit carnival-like and a tad expensive, but of course the kids had a blast. I mean they rode a camel, chowed on hot dogs and apple cider doughnuts and fed birds in a huge cage. What's not to love?

There was so much to do that we almost forgot our mission---to find carving pumpkins and possibly some apple cider. The kids picked out some pumpkins---one completely white one which looked like a swan. (Julie and Meme later painted and crafted to transform this pumpkin into a penguin. But, more on that later.)

After picking out the pumpkins, the kids washed and scrubbed them in a basin set out just for that purpose. There of course were hay rides and mazes and plenty of places to run and play.

Two thumbs up from Julie and Johnny. 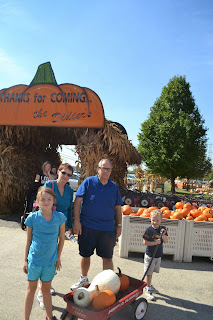 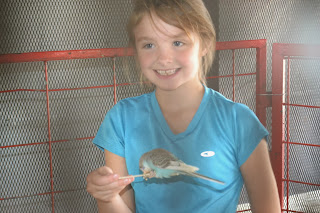 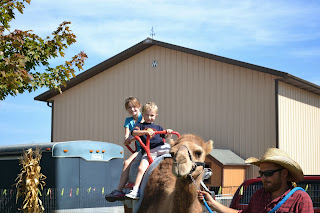 Posted by Kristy MacKaben at 2:17 PM